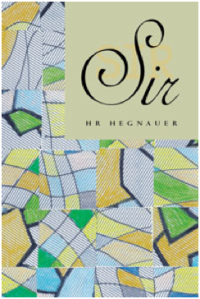 In her book Sir, HR Hegnauer writes with quiet, stirring, and at times hilarious power about her grandfather (Sir) and her grandmother (Mrs. Alice). Her rich glimpses of the past reveal how her grandparents formed and informed her childhood and young adulthood.

Sir is about human connection and disconnection, about bodies and gender, and, largely, about memory—its ability and its fallibility.

I learned about war for the first time in the first grade. We had just started fighting in the Persian Gulf. Mrs. Thom said that we wouldn’t hear any bombs, but that they were real, and they were dangerous — more dangerous than anything we’d ever hope to know. I remember her telling me that we had never lost a war before, and that this was something to be proud of. When I walked home from school that day, Matt told me that not only had we never lost, but that we had never actually been to war until now. I told Sir that we had never been to war before, and now we’re in the Gulf, but don’t be afraid because we won’t actually hear any bombs. I told him like I was an expert on the politics of war. He said, then what the hell was I doing in 1944? I said, I don’t know. Maybe it was only a battle and not actually a war. Sir looked at me. I remember this look for sure like he’s looking at me right now.

Writing Prompt: Write about your earliest memory or understanding of war.

• Include concrete details, accurate or not.
• Infuse doubt.
• As always, experiment with form and point-of-view.
• Write for 20 minutes.

For more about Sir and HR Hegnauer’s writing, click here and here .

Write a about a childhood toy or game.

1. Describe the game. What did it look like? How did it work? Did you play it with others or by yourself?

2. Do you associate any particular sounds or smells with this game? Was it a new or old game?

3. Was it a shared game? Did you own it or did it belong to a sibling, friend, or cousin?

4. Was there a time that your played with it regularly or did it disappear then reappear?

5. Describe a typical conversation between two people playing this game.

6. Did any frustrating moments arise from this game? Any tears? Any triumphs?

Write an overheard conversation that takes place in this parking lot.